Like all Aston Villa fans, I was stunned today to hear of the tragic death of our former striker, Dalian Atkinson.

Having been a mainstay of the Villa team in the earliest years of my support of the club, Dalian played in an era when, as a child who was quickly falling in love with the beautiful game, I viewed Villa players with an almost mystical aura. 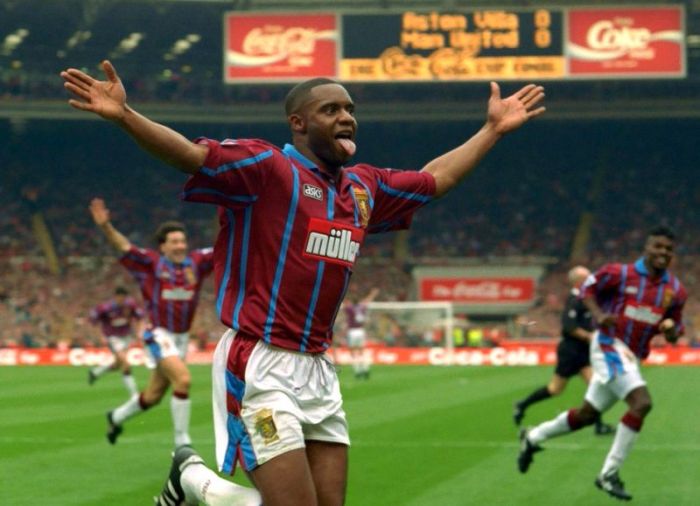 Put simply, Dalian Atkinson was a hero to me in the truest sense of the word.

Villa supporters are today, rightly, sharing their favourite memories of Dalian. From his equaliser in the 1994 Coca-Cola Cup semi-final, his opener in the final, as well as his goal of the season winner against Wimbledon in 92/93, there’s no shortage of candidates.

However, my favourite moment occurred not in a packed stadium, but in the rain soaked confines of Villa’s training ground.

Back then, Bodymoor Heath was much more open to the public than it is today, and my dad often used to take me there on a Sunday morning to enjoy a glimpse of my idols up-close and personal.

Invariably, I’d take along my own football, and dribble along the sidelines, daydreaming of one day being part of the claret and blue first team myself.

It was on one such morning that I was lost in this fantasy when I heard a shout behind me. “Mate! Give us a kick!”.

And out from the players’ gym strode Dalian Atkinson.

Dalian took control of my ball, dribbling around me while I, starstruck, tried to take the ball off his toe. Frustrated by my fruitless attempts to dispossess the mercurial forward, my tackles became more wild, prompting fears from my dad that I was about to injure our star striker.

There was no danger of that. Dalian was just too good. After about 10 minutes, our scrimmage was over. He shook my dad’s hand, ruffled my hair, and shuffled off back indoors. I recall my dad seemed even more euphoric than I did. “Never forget this day”, he told me. And I never have.

It’s only now, when I think about it, that I understand what an incredible experience it truly was. It’s difficult to imagine a scenario today where an eight-year-old kid can enjoy a kickabout with his football hero. It’s a memory I’ll cherish forever.

The tributes today from those who knew him best only serve to reinforce his public persona. A happy-go-lucky, likeable guy, who didn’t take life too seriously. Perhaps not seriously enough at times.

With that in mind, its really difficult to come to terms with the manner in which he died in the early hours of this morning. He’s one of the last people I would anticipate could end up in such a situation, and with little information in the open, it’s impossible to make sense of what happened.

For now, though, I’m going to remember him as a man who went out of his way to make a young boy’s day. I will sing his name loudly and proudly in the 10th minute at Villa Park tomorrow night.

You know I will. I really will.